Yep, I’m 31 going on 10, if you couldn’t tell…lol. Anyway, tonight’s pour is from Bear Republic Brewing in Healdsburg, CA. Quite honestly I picked this one up Because Racecar! There’s a faint checkered flag background behind the huge yellow number roundel. Bear states right on the back of the label that this is a big beer from a brewery who’s motto is “Bigger is Better.” They’ve certainly hit the nail on the head with this one – and driven it straight home to collect the checkered flag it deserves. Straight away, the aroma is a balanced mix of pungent resin with a super floral note; and the first sip lets that floral continue into awesome flavor. The resin aroma gives way to some interesting fruit flavors. 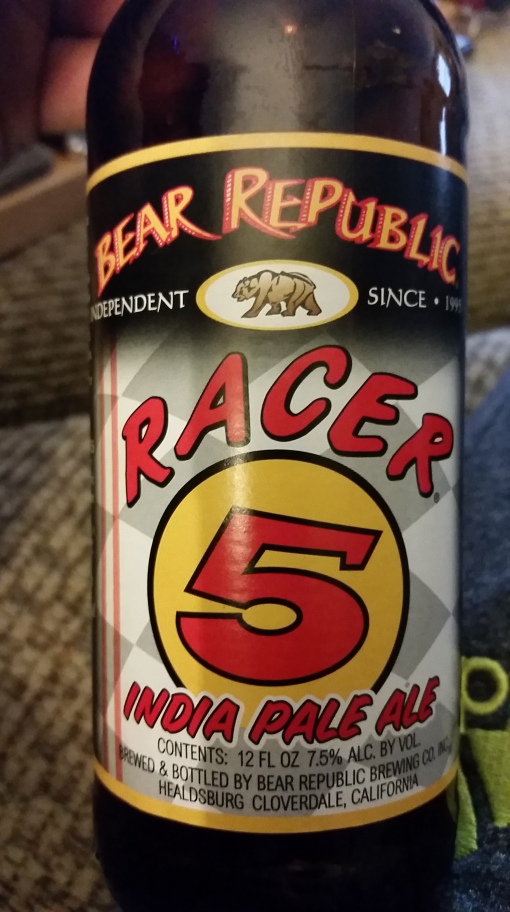 Very clean and refreshing, orange and grapefruit come charging up to round things out nicely. Despite being a “bigger is better” sort of IPA, it’s still very approachable, something even a novice IPA drinker could appreciate, I think. Overall, this is definitely one of the best IPAs I’ve had, and considering I picked it up on a whim because I liked the label, it’s amazing!

Here’s a good one – Stone Brewing’s brewmaster has turned to one of his idols to create a one-of-a-kind IPA – Sierra Nevada Brewing. I’ve said it many times, but here it is again – both Stone and Sierra LOVE playing around with experimental brews, and now that they’ve teamed up, they might have “blown the bloody doors off.” NxS has so much going on, it’s simply incredible. I’ve never tasted anything like it, honestly. They brewed an IPA which was then split 50/50 into rye and gin-infused bourbon barrels for aging, then mixed that with an identical IPA — I think. The description on the bottle is a bit confusing, and I think seeing a “family tree” style drawing might make it easier to follow where everything went, and when. Somebody create Beer Ancestry, now!!

Being a HUGE fan of rye whiskey, that’s obviously the first flavor that comes at me. And it’s all there. I’ve had plenty of other whiskey and bourbon barrel aged brews, but this takes the cake. It’s amazingly well-balanced, super smooth, and there’s no harsh finish you get on some of them. Once the rye subsides, the army of hops comes charging forward. They’ve used Magnum, followed by Amarillo, Chinook and Cascade to create a unique mixture of bitter, floral, citrusy, slightly herby, and pleastly resinous. I know that sounds like most of the typical descriptors for hops, but it’s true – they all shine individually; but also combine at various stages on the palate to create some new flavors. The finish is super smooth – it has an almost vanilla flavor, reminiscent of a quality porter or stout. In closing, this is likely one of the best beers I’ve ever tasted, I’d absolutely pick up many more bottles in a heartbeat. I would love to see how this one ages, despite being an IPA – which should absolutely be consumed as fresh as possible – I think it might age 3-6 months very nicely.

Well, it’s been a while. My apologies on that…pretty much hit Thanksgiving week and everything “normal” went straight out the window. Now that we’re a full week into 2016, I feel like things are finally calming down enough to focus on some good beer. So here we go! 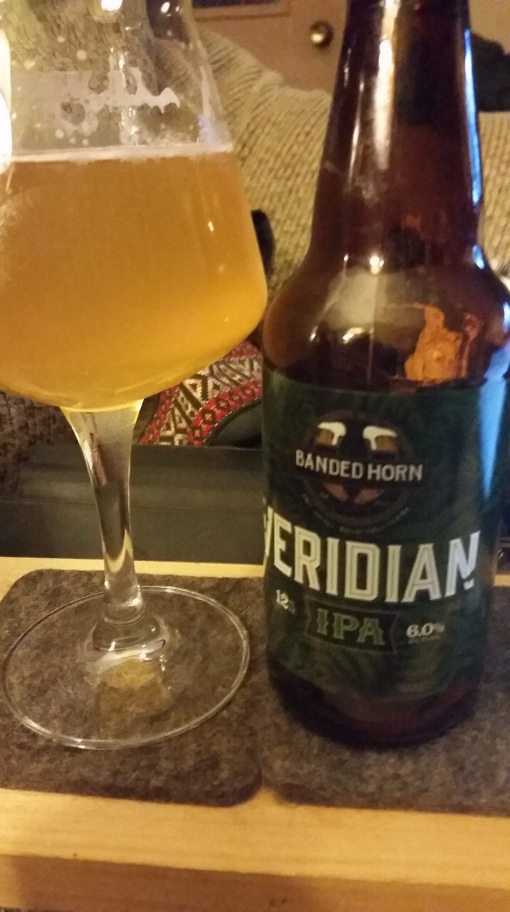 My first review of the new year is from a small brewery I’d never heard of in Biddeford, ME, despite having been through there a number of times for work. Banded Horn Brewing, despite being small and relatively unknown, is doing something right. Very right. Veridian IPA is described as a combination – Verdant, Viridia, and Veritas. Lush, green, truth – more or less. While the beer is not green, luckily (though green eggs and ham with green beer would be fun), it’s certainly lush, and that’s the truth. There’s a really nice tang to this one, it sits right on the middle of my tongue. The nose is super light, mostly a hint of mild citrus with a slight herbal tail. Working through my glass, this brew opens up nicely, releasing a wonderful floral flavor. Overall, Veridian IPA is an awesome beer, and I can’t wait to try more Banded Horn, and visit the brewery.
<>BM

Here’s a new one – a maple syrup- finished, bottle-conditioned IPA. Right on the  bottle they say sometimes 90 is too much and 60 is too little, but 75 is perfect…they’ve got that right.

The nose on this one is very much traditional Dogfish IPA, sort of a musky aroma. After that, all bets are off – the maple comes through really strong, but not overpowering. As much as I like 90-minute, I find the finish to be harsh, resulting in my only drinking one at a time – not something overly sessionable. This has a similar underlying flavor, but the sweetness of the maple cuts the finish down by a ton, making a big bottle easy to drink in its entirety. This brew is the perfect “Sunday Sipper” when sitting on the couch with friends, watching your favorite television program (for us, it’s F1 racing today), or just relaxing on your own. Regardless of where you’re at when popping this bottle, you’re in for an awesome experience!

This one’s a bit different. Ok, it’s a lot different, actually. Rock Art has created a beer the color of beets, but with the flavor of currants. It looks a bit like a traditional cherry soda, with it’s thick head and incredible color. This one doesn’t give off much aroma, but the flavor is all there. There is absolutely no malt or hop profile with this brew, it’s entirely fruit. I think I have to call this style of beer an acquired taste. It’s not bad, in fact I quite like the surprise change; but if you are expecting a beer with traditional hops and malt, you’ll be disappointed. Overall this is an excellent beer from a wonderful brewery, and if you’re in the mood for something completely off the wall and different, this is a great place to look.
<>BM

My second foray into Foley Brothers beer is their Spruce Session seasonal pale ale, brewed with Vermont spruce tips. Like my first bottle of Foley, this one isn’t a letdown. This time, the pour doesn’t offer any hints as to what’s awaiting the lucky soul who popped the cap – there’s no giveaway aroma that would suggest a brew with an ingredient as special as spruce tips.
In case you’re now scratching you head, wondering wtf I’m going on about, here’s a crash course on spruce tips — In the spring, when conifer trees start to push out new buds, the fresh growth is a little bright green pinecone that is edible. People pull on their wellies, go trudging off into the woods carrying a bucket, and pluck the tips much like they’re picking berries. Once the tips are harvested, brewers use them like hops, adding them at various points in the brew process.

So back to the beer. Foley has done an amazing job balancing the pine and citrus from the tips with their malt. I recall having another spruce tip ale a few years ago, and it was like eating a pine tree. This one is so much better. They’ve created an extremely fresh, bottled about 3 weeks ago, mild beer with an amazing flavor that you don’t normally find. I highly recommend this beer to anyone who may be looking for something new to sit back and enjoy.
<>BM

YAY!! Another one of the five!! This marks the third of Sierra Nevada’s string of five explorations that I’ve been able to find. Their second offering, Fresh Hop, features hops from New Zealand. Yep, Kiwi hops.
The Southern Hemisphere is known for a few things, including toilets that, when flushed, the water circulates in the opposite direction from here above the Equator, and seasons that are flipped; Spring up here is autumn down there. Sierra bought a whole pile of freshly picked hops from a farm in New Zealand this past spring, had them dried and shipped to the U.S., all within a week, then dumped them into the brew just in time to impart new flavors not typically experienced in North American beer.
Speaking of which, it’s pretty damn awesome. There’s a floral note about mid way though each sip that I’ve never tasted before. It perfectly segues the citrus nose into the malty finish, something that doesn’t always happen so nicely. Despite this beer being labeled as a “100-Day IPA – Drink Fresh, Don’t Store” brew, and the bottle I found was dated April 27, and it was August 31 when I consumed this, so we’re closer to a full four months, it still tastes awesome. If you’re able to find a leftover straggler in your local bottle shop you should snag it for sure. Overall, another awesome submission.
<>BM

Beer Man and I were pleasantly surprised by this Zin. Zins for us are sort of hit or miss. Sometimes I like them, sometimes he likes them, sometimes we both like them. I tend to love old vine zins most of all, which usually means I find regular zins a little lacking.

Not this zin! The Pellegrini is nice in that it has a lot of the flavor characteristics of an old vine (oak, smoke, dark dark berries, dry), but it is a lighter more user-friendly version. This is a wine you can drink with food, sip all night or both! Both Beer Man and I have thoroughly enjoyed this bottle and were a little sad to see the bottle pour its last drop. This was another highly delicious bottle shipped as part of our Wine Awesomeness membership.

Stone is at it again – churning out some of the best brews on the market. This time they’ve come up with a double IPA made using 100% Australian hops. They even imported Australian malt to compliment the hops perfectly. I’m quite happy with the flavors coming though on this one – in addition to the traditional pine resin and citrus flavors, there’s an underlying peach note that hangs on the finish of this hazy, goldenrod-colored beer. Overall, Thunderstruck is exactly that, an excellent homage to Stone’s 19th anniversary.
<>BM

Decided to clean out the fridge today, and discovered a bottle from a couple months ago – A Rogue Farms brew made using freshly roasted barley – as in they roast it and then shuttle it 273 feet (according to the back of the bottle) into the brew kettle. Despite having been lost in the chill-chest for a little while, it still tastes really fresh. I didn’t expect much, as you know I’m way more of a hop fiend, typically leaning away from malt-heavy brews. 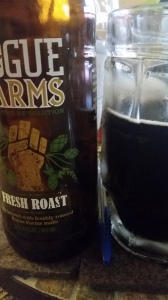 This one has an incredibly fresh finish to it, not something I’ve ever encountered with a malty beer. Usually they’re kinda heavy all the way through, leaving a serious “film” on the palate, making a bomber hard to finish. Rogue has, yet again, come up with something incredible, and I couldn’t be happier.
<>BM